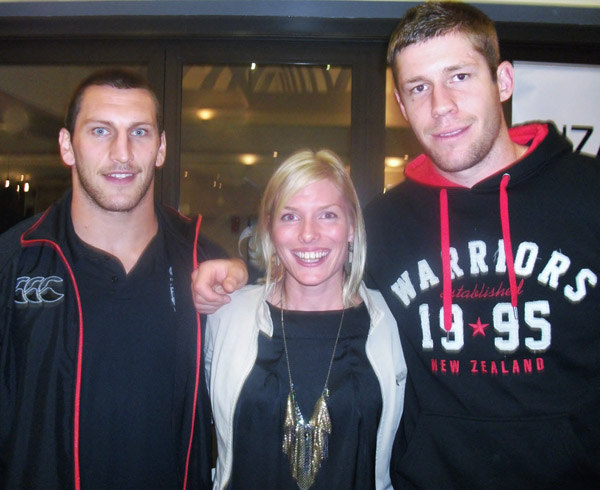 With a record field of over 80 players, a bunch of happy spectators, charitable sponsors and a dollop of fun, CanTeen reaped the rewards of a great day. A total of $6000 was raised for CanTeen by all those who participated. Thanks for a great day!

Even the weather came to the party at the NZACS Charity Golf Day held on 19th April at Remuera Golf Club. A record turn out of around 80 players enjoyed the day and were all spoilt for choice with a supply of food and drink on course donated by our fantastic sponsors. After a few hours of fun filled golf and a delicious dinner, it was time for the more serious part of the day - prizegiving.

Irvines had arranged for two Warriors - Lewis Brown and Jeremy Latimore - to hand out the prizes. Everyone was a winner on the day for joining in and supporting a good cause but the award winners were:

Nearest the Pin Hole 17 - Derek Larsen from Goodman Fielder - prize was 2010 Investec Tri Nations Powerade jersey framed and signed. After winning the prize, Derek donated the jersey to CanTeen for them to auction at another date. What a wonderful thing to do!

Silent auction winner of the Goodman Fielder All Blacks signed jersey by Blues and Crusader All Blacks was won by British American Tobacco. Runner up was Fonterra Brands who won the Bic World goody bag 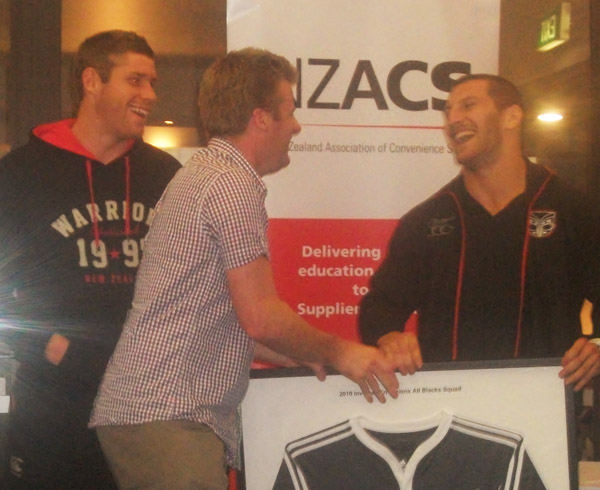 The best part about the day was presenting CanTeen with the news that a total of $6000 had been raised for them on the day. James Sutherland, Fundraising Manager from CanTeen was ecstatic. We could not have had such a successful day if it weren't for everyone's participation and especially the contributions made by our sponsors.
Special thanks goes to Goodman Fielder, Heinz Watties, Fonterra Brands, BP, Coca-Cola, Cerebos Foodservices, Irvines Pies, Frucor, 2 Degrees, Cadburys and Bic World. Thank you to all for a great day and we will see you at our next event - the Peter Jowett and Industry Awards on 11 August 2011 at The Heritage, Auckland.

Above Right: Lewis Brown and Jeremy Latimore present Derek Larsen from Goodman Fielder his prize for Nearest the Pin